Reflections on Camping: by Allison 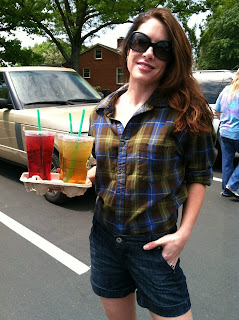 So thinking about list terror reminded me to draw up some reflections on camping. Here goes:

1. It is official that I should never ever be put in front and given a map and tasked to get us to a place or thing. I will probably get us a little lost, as pointed out by my traitor daughter E (in my defense, it was a really bad map)

2. When there is oncoming girl-group think-freak out due to possible poison sumac exposure, being married to a doctor and reading health articles in Glamour give me enough pretend authority that coating the nervous girls (because when someone says itch, you start to itch) in Purell and stabs from my handy Tide to Go pen (I always carry Tide to Go, as it is magic, but in this case I meant to grab insect relief stick instead, which proves I am not a survivalist, but I am a pretend voodoo medicinewoman).

3. Ants can be killed when doused in bleach and whatever else squirty was around.

4. On a night hike in which ranger says there is no danger because "we can all run faster than him" if danger approaches, a worried Girl Scout will be soothed when I say that I am a ninja. In fact, I have visualized being a ninja enough that I may actually be one.

7. Makeup remover wipes fix everything, I demonstrated this so much that I am now owed royalties.

8. There is never enough tea.

From camping expert Allison
Posted by Allison at 8:24 PM