The Gift of the Magi, Except Totally Completely Not At All That Poignant, by Allison 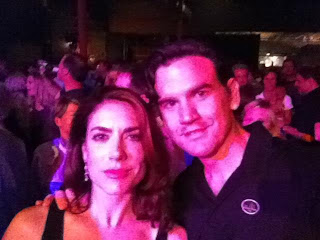 So the above photo is of Matt and me at a recent, seriously old-school college era Drivin and Cryin and Connells show. English teachers of mine, please admire my O'Henry reference, and by the way, The Gift of the Magi was like the saddest, worst thing I could imagine as a child, and absurd as an adult because I am totally not cutting off my hair for Matt to have a watch band.


But as a kid, the image of this shorn lady with useless hair combs and the guy with no watch depressed me to no end. I understood they loved each other so much they sacrificed their best thing for the other, and believe me, I love gifts and Matt can Magi himself out as far as selling possessions in order to give me jewelry, but he knows better than to mess with his floppy hair, but that story made me so sad for the lady with no hair and I wanted to somehow insert myself into the story and fix everything and have them just make each other cards.

So, you may wonder, how is she going to tie a concert to a well-loved (not by me) short story? Here is how: before the concert, I was downloading a bunch of the bands' music, because I lost all of my recordings of them in The Great Air Conditioner Leakage of 1995.

I sat on the computer and made a little tutorial for Matt, who claimed to be oblivious about the music, which I do not know how he existed in the same world I did during that era and be oblivious, but that was his story. I do love giving Lessons in Music, but here is my huge sacrifice: it was raining outside and our front porch is really delightful in the rain. So, Lesson in Music Preparation equals the hair thing (yes I know it is totally not as dramatic or sad or much of a sacrifice and I probably had fun doing it, but the porch in the rain is even better) because while I was drafting my documents and downloads, Matt is on front porch, candles lit, hair floppy, guitar out, playing along to Van Morrison. And I completely miss out, due to my very lengthy tutorial preparations.

And Matt is outside, let's say pining for me (I know this post is too long and he won't read it and raise an objection or alternative emotion) while I am slaving away, on his behalf. Ok, now that I think of it, his part of this story totally does not equal the Magi watch thing. Harrumph. I think I am going to go in the spirit of the story, sacrifice and love and putting the other above you, and demand that he sell something and get me some earrings because he did not live up to his end of the dual suffering  --  porch in the rain with the guitar and all is a sad thing for me to miss out on, and the worst part is that when he blew out the candles, brought in the guitar, the rain had stopped, and he came upstairs and I presented him with my Lesson in Music, and he's like, "oh yeah, I know this song. My band played it. I know that one too."


He is totally going to have to sacrifice something, otherwise my analogy does not make any sense.
Posted by Allison at 11:01 AM