Don't Wait Until Halloween To Buy Candy Or Abraham Lincoln Might Yell At You. Holiday Shopping Advice, by Allison

So, I guess the past few years,
I have been busy fighting the Harlot versus Hermione
Halloween costume wars negotiating costumes for my daughters?

And so have been too distracted to notice what day I buy Halloween candy?

I could have sworn I always buy it on Halloween,
since there is no need for giant bags of candy in our house,
ever.

This was identified early on,
when in a state of Deranged Early Parenthood,
Matt hand-fed toddler V M & M's,
so she could fully experience her first lunatic sugar rush,
and subsequent histrionics?

She was an adorable giraffe,
(she loved that costume),
until she was a Deranged Adorable Giraffe,
running in circles,
for 45 minutes,
squealing "Wheeeeeee!"

It was very cute, for 10 seconds.
It became much less cute after a while.

And since I was due to have second soon-to-be-trick-or-treating child soon,
I put:
TOO MUCH CANDY IS BAD
in my "things to remember" file in my head.

And really, anyone with sticky, glassy-eyed,
candy-addled,
deranged children learns that at some point.

And in our house?

When all the candy gets sent to Matt's office?

We know it is me,
but whatever.

The ridiculous,
immediate Christmas stuff all over the place is helpful as a distraction.

But somehow the acquiring of Halloween candy,
to hand out to adorable trick or treating kids?

(Note:
And NOT to the grown dudes on their cell phones,
not in costume,
holding out a CVS bag.

Unless it is the end of the night,
and I want to get rid of the candy.)

I guess I did not actually wait until the day of Halloween to buy it.

And since I am a benevolent benefactor, I will share the absurdity of my day:

Trick or Treat?
Or Total Hell At Target For Two Hours?

Don't Wait Until Halloween To Buy Candy Or Abraham Lincoln Might Yell At You.
Advice by Allison:

1. So today on the way to school,
my girls remind me to buy Halloween candy,
since they are aware there is none in our house yet.

Me: "I know.
You are all in costumes,
there are pumpkins, I will get candy."

E: "Don't get the gross kind.
Get good candy or it will be embarrassing."

Me: "I always get good candy.
You just don't know that,
because I give it all away before you get home from trick-or-treating."

M: "Get enough candy. We always run out."

Me: "No, we don't.
I just give giant handfuls to the last few people,
so we get rid of the candy.
You guys come home with giant bags of candy.
You are fine."

2. And though I am painting myself as a total buzzkill,
bah humbug Halloween person?

And I have done secret case studies for years!
(I am a scientist and sociologist, you know)
where I put their candy in a bowl one shelf up from their height,
but visible?
And it is interesting to them,
for like,
a week.
Then they totally forget about it,
and I start throwing it out.

But I leave some in, and it stays until Easter,
and rinse, repeat.

For years.
Like, more years than I want to add up.

I could have sworn I always waited until Halloween to get candy.

3. But apparently?
I am a bit hazy on my timeline.

4. Because?
Today,
which is Halloween?
And I go to Target for candy?

6. It was hard to find a parking spot, weird.

8. Weirder still, there were like,
total empty areas of the store.

9. The newly-stocked Christmas stuff was plush and shiny
(Note: I will save that rant for later) -

and it is not like I was looking for costumes,
or decorations,
or anything but candy.

Which they have giant aisles of at Target,
year round.

I am aware,
because of the thing of candy aisles are near the toy area.

And that is Danger Zone.

In which I only enter solo,
or else my children turn into savage vampire feral wild things,
regardless of season.

I can find kind of dazed,
After The Rapture If The Rapture Was About Candy,
Left Behind looking people,
roaming around.

I can find an Abraham Lincoln,
appropriately attired,
and accompanied by a tiny Spiderman.

That would have been a charming little scene of whimsical costume mashup,
if Abraham Lincoln hadn't had a rage issue over the lack of candy.

I tend to think of Abraham Lincoln as having a gentler tone.

11. Also there is a dude wandering a round yelling "VERA!" at the top of his lungs,
every two minutes.

Often enough that other candy-seeking scavengers were discussing him.

Was he looking for someone named Vera?

Was he hoarding all the candy and eating it and acting deranged as a result?

My theory was:
"Method actor.
Thinks he is in A Streetcar Named Desire
(he was wearing a white t-shirt, I was thinking Stanley Kowalski-ish.)

He has not actually read or seen that play, though,
and doesn't realize he is supposed to be hollering "STELLA!"

That actually made me super-sad for some reason.

I could have ruminated on that for a while,
but?

A guy with a dolly roller thing.
Full of candy boxes.

And he was descended upon, like,
well, a horror movie.

Night of The Locusts,
Dawn of The Dead,
anything zombie or famine oriented?

13. Lucky for me,
he had a lot of candy to throw at the foolish, late candy shoppers.

14. Unlucky for me,
the line to check out was worse than school supplies,
or Christmas-not-too-early-but-before-all-the-good-stuff-is-gone time.

15. I had time to read a whole magazine,
and text around about how lame it was at Target.
(Multi-tasking)

16. And I was so desperate to escape?
I was throwing bags in my car a bit too enthusiastically?
Desperately?

Whatever my mood,
it led to me breaking a case of Diet Coke open,
and more than one can split,
and sprayed Diet Coke all over my hard-won candy.

I could hear it fizzling all over the place,
as I drove home.

17. And I was hoping maybe it wouldn't be that bad.

But it was bad.

18. Lucky for the trick or treaters,
the candy was in bags.
and is not extra spiked with caffeine on top of sugar and additives.

Don't wait until the last minute when candy is involved?

Even Abraham Lincoln can get deranged when deprived of candy?

I would have time to figure this out, if I had an intern.

As You Wish? I Totally Wished!! And Now Princess Bride Behind The Scenes Book? Happy Birthday To Me, by Allison

Um, in case it is still up for debate?
Which it shouldn't be,
considering my Exhibits A-Z  Infinity Plus?

On Proof I have Superpowers?

I have more proof!!

Please note that for the record.
Whatever record, if there is such a thing.

If there is not such a thing?
There should totally be a thing.
And I want credit.

Because?
Last year for my birthday
(Or because that is when the book was published.
But I choose to believe it was for my birthday,
and I am always right. )

One Mr. John Taylor of Duran Duran wrote his autobiography.
Which was super cool of him to do, for my birthday and all.
Proof!
( http://www.iwantanintern.com/2012/12/dear-john-taylor-thank-you-fan-letter.html)

And what a glorious, nostalgic,
without being stale,
or past its shelf life book -

It could have gone wrong in so many ways,
and it did not!

Which is a perfect birthday present for me,
actually.

As we enter the Season Allison and M
(my youngest daughter and also Advocate of Autumn)
declare as Celebration Of Us,
And Also The Clothes Are Better?
Proof!
(http://www.iwantanintern.com/2013/09/all-hail-changing-of-closet-or-it-is.html)

I have another birthday
(Note: But I am still very, very young) -

And what do my wondering eyes should appear?

Another book totally aimed at the target audience of me.

(And great timing, by the way.
Because my Kindle,
or Matt's Fraudulent Second Deranged Kindle,
is misbehaving.
So I need an actual book.)

As You Wish,
behind the scenes of the making of The Princess Bride? 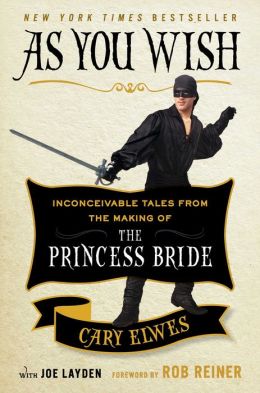 I do not yet own this book ,
but the lovely emergency shipping people are working on that right now.

And since I finally got my girls to watch The Princess Bride,
which was a top parenting goal of mine,
yay to check that off of my non-list?

And they love it too?

Maybe it will be family heirloom.

I really hope it is good,
if it sucks that would totally suck.

I have a good feeling about this, though.

And since it magically appeared at my birthday?