Why Is DEATH Emailing Me, or Yet Another Reason Why I am The Worst And Need An Intern, Is Emergency Here, by Allison

So am on Mission of Organization, which is like, my Least Favorite Mission ever, am pretty sure nothing is harder for me.

And right now, it is only thing on my plate, other than breathing in and out, and yet, I cannot do it.

What is wrong with me?

I have technology, iPad even, with calendar on it!

I am sure trained or untrained monkeys could do what I am absolutely not able to do.

As I am scheduling the girls whatnot and our basic school year lives, amongst the detritus of school supply lists covered in tea and tears, Matt's calendar for the year in some unknown format on the computer so that is toast, and notes on when Junior Assembly is for which girl (Note: friends of mine, please keep me straight on this) I keep finding:


1. Scribbled notes I wrote to myself, or notes I wrote to Matt about bands I want to see
(Note: This is the biggest note, and I apparently gave a star rating based on how important it was to see which band, and used both sides of a big envelope, and wrote Matt Investigate!! at top, Which, ha!!

What am I asking him to investigate, Whether my star system is accurate? (

Answer: Not relevant, if I gave stars, they are accurate in Allison World, which, poor Matt, is World he is stuck in forevermore, remember I am vengeful ghost, too)

Whether I am being reasonable about us going to apparently three concerts a week in varying states for the next three months?

(Answer: Totally reasonable. Is showing the girls that Music Is Important and Mommy and Daddy Also Have Own Lives And Are NOT Lame)

Whether I am lunatic person? 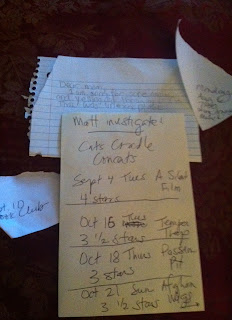 (Note: Above random scraps of lists and letters and notes and whatall, instead of organized things)

2.Something I do not even know what

3.An apology note from E,  reading "Dear Mom, I am sorry for screaming, and yelling and throwing a fit. That was unacceptable."
(Which, Ha! True, but funny, but sad how true)

4. TWO handwritten birthday lists for M, the six year old stylist. Who is not seven year old stylist until October, but she not only wrote one herself, she had E write one too, with big letters and exclamation points, requesting the following items: 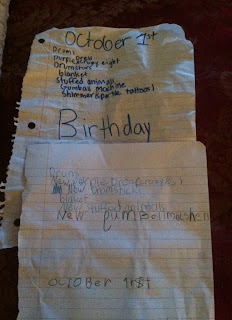 1.  Drums
(Note: Matt is totally going to do this to me, as payback for me letting M watch tons of music videos and discussing drummers and bass players and possible brooding tall guitarists who may or may not be British)

2.  Purple Dress (that I would not buy her when back to school shopping because she has more dresses than I do, and that is already a lunatic amount)

3.  Drumsticks
(In case not included with Drums? Or extras, that she can throw to fans at end of show?)

4.  Blanket
(??? She has forty majillion blankets, she is not cold, no worries there)

5.  Stuffed Animals
(Note: We have so many stuffed animals that the good dog AND the bad one can chew up two per day for eternity and we'd have enough for ten bags of toys to donate every month)

6.  Gumball Machine (To replace the Hello Kitty one she got for Christmas that did not work and I threw out eventually because it was big and annoying, and that made her mad)

7.  And Shimmer Sparkle Tattoos, instructions for me to consult her friend C, otherwise known as daughter of my friends B and RTG, since I will totally get the wrong kind otherwise.

So the most organized thing of our year will be M's birthday requests, and our bands to go see. Otherwise, I am flailing here.

Really, because next? (Spoiler: It Gets Worse!!!)

Making sure I am not dropping even more balls than I realize, I check through my emails, because I know I have Girl Scout Planning tomorrow and lunch with cool friend and other things after yuk gym, but am sure I am forgetting something, like the library books V forgot all year that are sitting in my car to return to school, but I don't want to do it so I haven't, and what do I find in my Inbox?

An entire email conversation thread, from Death, to Me.

From DEATH. To ME.

It is in there, amongst the ones from actual people or things I know I have talked to recently. DEATH.

And somehow I forget this?

Isn't that a poem?
Death came knocking the other night, it was not the first time he came?


I HATE that poem!

It is both scary and sad!

Shouldn't I remember if DEATH is emailing me?
What in the world am I doing here, I begin to panic.
Of  course, instead of clicking on it, I panic for quite a while and persevorate and interpret and wring my hands and dither and dather and whatall else NON-helpful activity I would do, except for clicking on it and seeing what Death and I have been chatting about, that apparently I forgot.

I finally think to do that, and Thank Goodness!

Not only was it NOT an email conversation from Hades that I forgot about which I should have not forgotten about, it was from Death Cab For Cutie, reminding me to buy my tickets
(Note: Early, Am Fan! With capitals! Meaning, I get to buy my tickets early, whee!! And am never early for anything, as indicated by anything and all written above) for Ben Gibbard's solo show coming in November.

Universe, you almost fooled me, for a minute.

Just when I thought I was messing up, not doing what I was supposed to do, was not organized at it is not normal to have scribble scrabbles and lists and apology notes instead of typed out computer printed schedules, YAY!!!

Because:
1. No schedules
2. Nothing organized
3. No idea what some of those ripped off papers are about
4. NEED INTERN
5. But HAVE gotten tickets for the Ben Gibbard show. Early, even. First, maybe.

Your Friend (Note: Friend that is living, that you do not want to kill, if you were really Death, which you are not, you are Death Cab for Cutie, a BAND, not an agent of doom) ,

Allison
Posted by Allison at 5:12 PM