Origami v. Orange Crayon Contract, I Totally Need An Intern To Write Up The Court Ruling, by Allison

So last night on the way home
(At 11 pm, ug)
from swim meet,
E is all, "my friend's mom said you wrote something about our horse towels.
Why don't you write about me?"

And I am like, "E, I do write about you, I promise!
(Note: This is the exact opposite of any conversation that will ever be held between her older sister V and me,
with V requesting NO writing about her, ever.)
E says,
"Did you tell them about my orange crayon contract?",
because she knows I love that thing.

And I have yet to share that heart-warming story of my daughters' squabbling and how I brilliantly intercede,
otherwise known as try to get them into different rooms so they will stop,
so here goes.

And for the record,
I am pretty sure that Good Parenting Mommy Fun Times Magazine is going to frown upon my attempts,
but so be it.

So V and E are bickering about something,
I don’t know what,
and came to me talking very loudly over each other,
trying to get me to resolve unknown issue and punish the one that wasn’t them.

I told them to go to separate rooms and figure out why they were mad, and then we’d talk.

V, as this is her nature, goes off to make origami.
Not kidding.
She is very good,
so I am intrigued to see what kind of origami she makes as visual description of why she is mad at E.
E stalks off with an orange crayon and paper,
and I get kind of excited thinking about what sort of document she is creating.

I am lifelong Writer of Documents,
and can do quite the Treatise On How You Have Done Me Wrong.

And E does not disappoint,
she comes back with a contract.

My law books are in the attic so I am not sure how she became so savvy in contract drafting,
but hers is very well done and is probably legally binding in the jurisdiction of our house.

It reads, verbatim:
“V is not allowed to pressure point me,
pick out her own movie,
eat all of the breadsticks,
and tell me not to sing or that I am annoying.” 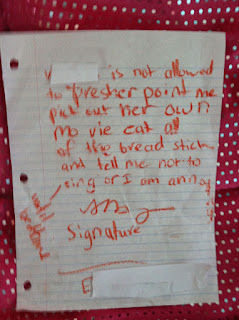 There is a signature line for me as witness,
and for V and E.

I praise her for her clever contract,
we negotiate that she will not sing after bedtime,
and I sign it,
and V is feeling much better after making origami swan and frog.

I certainly have daughters with very different skill sets,
but I happily take origami and contracts over bloodshed.

And during all of this M was in my closet ranking my shoes in order of which she thought were prettiest.
All's well that ends well, I think smugly,
for about two seconds.

By morning,
V decided that she wanted out of the contract she signed with E,
because what if she really got sick of E singing all the time?

And she says “like a pinch on the neck of Mr. Spock.”

So then, we have to suspend Appeals Court (this may be why I am not automatically Judge of All Things, although I think breaks for Beastie Boys is a valid court ruling) to dance to “Intergalactic.”

When we resumed the appeals hearing,
V's argument was that the contract was not valid due to it being written in orange crayon.

I am all, oh yes it is, contracts scribbled on napkins sometimes hold up in court,
orange crayon is not a deal-breaker.

And V gives me a look,
so I drag down my crate full of law books and bluebooks (from Ye Olden Days) and present to her some contract facts,
and at the stack of information,
she gets glassy-eyed and goes off to draw a kaleidoscope.

Not kidding.
By the way, this is how I (in my mind) win arguments with Matt,
if we are debating something tangible,
I do my whole argument,
then research it for hours and highlight important facts and details that prove I AM RIGHT,
and then stomp downstairs to present him with this opus.

At which time, he has totally forgotten the argument or debate and is all,
what in the world?

And accepts giant bundle of facts,
plus cover memo from me,
but I seriously doubt he even reads it,
which means I win, right?
It appears V has the same tendencies.
But her retreat into kaleidoscopes (which are fantastic, she is artist) was kind of the same as her pleading no contest,
so orange crayon contract stands.

No pressure pointing,
complaining about singing,
or calling anyone annoying.

So then I had to write up my findings,

and this is totally why I need an intern.