Anyone Up For Hosting Halloween Party For 65 Sixth Graders? Boys and Girls? In Costume Disguises? With Candy And Possible Meteor Shower? I Can Help, Because I Just Did That, Otherwise Known As, Do Not Hand Thirty Middle School Boys Rolls Of Toilet Paper, Party Planning! by Allison

So when V and  her friend CC want to host a Halloween Party for the entire sixth grade?

At CC's house, not mine, her mom TC is way cooler and braver than me, and two more girls sign on for co-hosting?

And allowance is spent on Halloween decorations, and every kid seems to be coming, and there will be candy?

And also, chaperoning this many kids (65!!!!!), some in costumes so maybe I won’t recognize them (Note: That totally happened, some were wearing bodysuits hiding their faces and entire selves, I eventually figured out who was who but it is hard, those wily tweens)

I get a bit nervous?
Maybe that is understatement.
Slightly more than a bit.
Maybe a lot more.
Like, is it possible to both be vigilant chaperone but not ruiner of party fun?
And not embarrass V but still relish seeing the kids having a good time?
Is that possible?
What if a meteor lands? That could happen, you know.
So fine, maybe no meteor, but I have only daughters, sixth grade boys are as much a mystery to me now as they were when I was in sixth grade
(Note: but my extreme people watching skills pegs the overall traits at "labrador retriever" plus "huh?" plus "pizza?" plus "why are the girls so tall?"  plus "gibberish about video games I do not know what" plus still having fun doing kid stuff when no one is looking, and having a good time, and also not blowing stuff up, I have no idea, I have (three very different but still have that one thing in common) girls).
I have a steep learning curve ahead of me, middle school boys, they are mystery creatures. Whose style choices confound me.  Specifically sock choice.
TANGENT ALERT!!!!
The guys all wear those totally weird mid-calf Nike socks now, like black socks with their sneakers, and I do not understand it at all, but I do not want to be all "What in tarnation are you youngsters up to? Back in the day, only the strange neighbor mowing his lawn wearing a hat and undershirt wore black socks with his lounge shoes, uphill, in the snow."
Evil genius Nike marketers have pulled off major victory in whatever in the  world they have done to make these unflattering, weird socks the total cool thing.
And I did ridiculous trend type style choices in middle school (Note: Shut up, and no pictures) and am glass house not throwing stone (Subnote: But not wearing vests anymore) am pot, not pointing out any colors kettle might be.
But seriously, I have eyeballs.

I am just saying, do not stand in the front row for pictures in those socks or you will regret it when the world remembers mid calf black socks are bad all around, and not to show but to be worn under pants, and black socks with white tennis shoes is horrible, and you will be the boy version of me with the "What was it about the Dirty Dancing style long jean shorts and my sweater worn backwards that made me think I didn't look like I got dressed in the dark in the closet of a giant with bad shorts selection?"
SOCK TANGENT OVER. Back to nerves over 65 boys and girls, middle school aged, some in disguise, also lots of candy plus so many random variables my head hurts?
That is a reasonable reaction, right? I can veer (wildly, or not, I'm not saying) off course on the "reasonable way to react to (fill in blank, no flipping the paper over to continue list)."
But wait!
Must factor in: TC  throws a party like nobody’s business, somehow with no giant panic of "my house is going to totally get wrecked in ways in which I cannot fathom but will be very sad about later."

And TC can ward off possible mischief making by unknown number of party guests crowding into playhouse, she just walked over to it, said "Hey, who is hanging out in the love shack?" and the boys burst out of that house so fast you would think they had superhero costumes on.

Problem solved, in one second, in a way that was super funny and no harm, no foul. Brilliant.

And the girls have decorated the house in amazingly cool ways (Note: coffins! caution tape! luminaria! creepy things! everywhere!) , there is a super talented DJ who also break dances, and most importantly, the kids are fantastic kids.
And party is a blast, and nobody lost an eye, or anything other than a mustache that was fake and would not willingly cooperate.

(And telling the former moustache wearer, "Go find V, she can fix it if she still has the duct tape she used on the hatchet headband" is a weird sentence out of context) and everyone, including chaperones, had fun, and again, 65 kids!!!!
I'm maybe even missing a few. There were lots of them.
Behaving and having fun and being awesome!

At fun party at amazing house with great music and food and candy and the kids are rejecting the food as they were having too much fun to eat pizza and candy!  (I was pushing pizza and candy on the kids until I realized that was crazy. I was actually walking around waitress-style (Note: Not that I ever got to be a waitress, I was always stuck with being hostess,  otherwise known as air traffic controller who the waiters all hate because you sat a baby with mashed carrots or a mean man with water issues in their section) ).
It was miraculously free of any natural or man-made disaster.

Or even a girl crying in the bathroom.

I was ready for that, that was one of my jobs in my sorority in college one year, kind of patrol person for the criers and the dudes pulling light fixtures off the walls at spring formal for reasons that I do not know.

Or even less than full on smiles and dancing and zip lining (TC has cool backyard) and frolicking in manner I was afraid would not exist anymore, they'd be too worried about being cool and disengaged by fun.
Yay to these kids, kids that it has been a privilege to see growing up before my eyes.
I actually had to stop myself (This is probably not a surprise to anyone who has to deal with me watching swim meet or violin concert or anything involving kids doing something wow and growing up and then I cry) from turning Great Aunt Hattie "I remember when you were THIS big."

But I refrained, because V would kill me and I really did not have any quarters to hand out after the "THIS big," and I think is the law for Great Aunts, the quarter must be distributed after the awkward, embarrasing for all total super obvious observation.

If the worst thing that happens is me realizing I have just handed 30 sixth grade boys full rolls of toilet tissue for mummy contest, and maybe they might TP something other than mummy?
(Which, note: I totally handed sixth graders rolls of toilet paper, forgetting they are no longer Kindergarteners who will kind of follow the rules, and seriously, what is wrong with me not to trouble shoot that possible - otherwise known as for sure going to happen - TP extravaganza?
Totally me being idiot.)

But cool kids throw me a bone, and help clean up all of it!  For real.
They cleaned up and continued with the fun?
That is an excellent party.

And you would think, maybe I'd get like a day or so of a grace period with V, like I am protected class person for a bit due to extreme coolness of being up for helping host and chaperone giant party full of costumed MIDDLE SCHOOLERS?

Not so much.
I mean, she's V, so she's not throwing things at me, but she is participating and perpetuating the Apparent Endlessly Fun Game For Others Known As Terrorize Allison With Images Of The Object Of Her Totally Valid Phobia.

Observe the pumpkin V carved, in secret, for our house for Halloween: 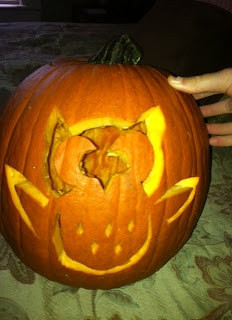