Thundersnow? Bogus. No School? Bogus. Snow Custard? Disgusting. Otherwise known as, I Am Worst Snow Day Person Ever, Except The Shining Dude, by Allison

So, we have snow day.

Otherwise known as, in a Christmas Carol/It's A Wonderful Life style Allison, WHEEE!

In current life Allison, is more like "Is school out? Ug. Is it enough good snow to make snowman or snow princess (depending on which kid)?

Will that snow thingy person be melty Jabba the Hut, Wicked Witch, Mommy can't build a snow anything?

(Note: When V was little, her first glimpse of "Mommy is really not good at this" was when I tried to make a snowman/thing with her, and I guess I forgot the caveman rules of how to roll something into a ball, so we had a blob, and I tried to decorate it with the winter camellias, but they were kind of peaked at that point, plus I had no carrot nose.
So it was slushy gross blob of melted goo with half-dead camellias, chocolate chip mouth, and radish eyes, and it looked so insane blob was pathetic enough that when Matt got home he was all
"What in the world is that monstrosity?"
And Indignant Bad Snow Sculptor But Still, You Try It When Also Wrangling Toddlers Allison was all
"Um, you get what you get and you don't pitch a fit.
Toddler law.")

Last night we had alleged "thundersnow", and I am still not buying that as a real thing.

(Note: I babysat for a little girl who was all about Jem. Do not judge.) 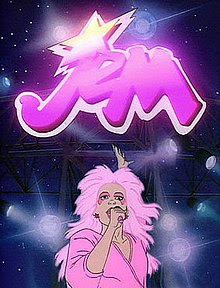 Allison's Snow Day Analysis, If This Becomes A Thing I Want Credit:

1. My first memories of snow day, meaning no school, involved getting escorted via red wagon to grocery to get supplies for Armageddon, we must have milk and eggs and bread.
This was exciting because, being pulled in a red wagon is awesome.
Plus,no school.

2. Snow day equals what?
We have to go for two Saturdays to make up for snow day school closings, and that is very Breakfast Club ridiculousness, minus famous people or John Hughes.

(Note: I will never stop mourning John Hughes. His movies (the real ones, that he directed and wrote and did soundtrack) sculpted my views on the world, opened my ears and mind and heart to music not offered by Q -94 drivel pop hair band radio, cannot even put into words what those soundtracks meant to me other than, too many great bands to mention, I wore out cassette tapes prior to technology so it was like, dragging large electronic things uphill in the snow, like plowing, but for good music)

3. Have you seen The Shining?

The movie with the totally, horribly, viscerally TERRIFYING snow plus deranged writer/metaphorically overburdened parent figure/scary, scary dude with the ax and the "Here's Johnny" and the redrum and the I am not thinking further so I do not give myself additonal nightmares?

Try watching it for the first time, at your friend LH's house during high school snow blizzard no school for two weeks global warming preview.
And then walking home in 20 inches of snow across golf courses to return to your home, where people are not redrumming and typing "All work and no play makes Jack a dull boy" or whatever ax nightmare poor Olive Oyl is a goner", but it is similar to landscape in Kubrick horror movie, that leeches onto your worst fears and milks them dry until you are running, in snow boots that don't fit, like maniac person, to get home so you will not be slain with snow all around and witch twins and creepy New England death hotels.

Long story short, I ran home in ill-fitting boots totally sure I was going to die.
Over giant piles of snow on our golf course, heart racing, sure murderer was on his way.

Plus, we had certain exams cancelled due to snow blizzard possible murder spree by talented actor who goes all out with the crazy.
And I like tests, as I study and want grades and want to prove I read it and highlighted it right and are you joking, no test? What?
Why did I read this?
Why did I do weird things with plankton?

I want my A, please.

Stupid snow horror is messing with my GPA.

3. Post high school era, good luck scraping the ice off of your car, you have to show up rain or shine, whether you are a postman or not.

In college, one of the prides of my school
(Note: Nerd school, in town where most stuff is circa 1700's, so no chic nightclubs, FYI.
In fact, the only "club" is the place that used to be a roller skating rink when I was in fourth grade, I had my birthday party there, and that was awesome. As college sorority formal attendee, not so much.
It was renamed "Club New York."
It was no Club New York, no matter what we named it for excuse to wear sparkly dresses)
anyway, bragging rights that our school is that never closed or cancelled, not Revolutionary or Civil War or patronizingly educating wrongly named "indians" during war in between those wars.

Until the age of lawsuits.
At that point, fine,no classes.

Idiot Allison tries to get to library as I am nerd, and fall at first step and slide, at full force, across the entire Sunken Gardens aka ice rink. People laughed, which was rude.

4. Snow day takes another meaning when post-you are the student era, and now you are gainfully employed. Then, school kids are off, and you have to go to work.
Was like bucket of ice or such dumped on my head.

I am not kidding, that was the exact moment I realized I was a grown up, like it or not.

5. And when I am mom in charge of little children, the pre-school weather shut-downs are the WORST.

Nobody will take charge of your toddler who bites so you can deal with the other baby or whatever.
For weeks, because road is icy.

Road right next to my house, in historic district otherwise known as, big trees slice through power lines.

And while mourning harm to beautiful magnolias, also mourn this:
No power equals no ability to deal with baby and stick older one in front of Baby Einstein, otherwise known as baby crack.

6. Also the power company does not care about the above mentioned dilemmas. At ALL.

7. And snow day on day in which your daughter E, best advocate for herself ever, like maybe the only challenge to the "lawyer who represents himself  has a fool for a client" theory?

Given, she is 10, but still.
Girl can advocate.

And if snow day messes up her planned birthday extravaganza, no entertaining stories on how I brought ponies into the house and had bad clowns during ice storm placates her.

No, I do not want to frolic in the snow, MOM. I want my party.

8. And snow day involving made up subpar superhero names like Thundersnow, on day in which oldest daughter V is supposed to go to the farm where her class has individual plots to tend and harvest and whatnot throughout the year (Note: again, is fab that their school does this because I am in no way capable of it at ALL), and is E the world's best advocate for herself has a birthday, and M the seven year old stylist is challenged (rightly!) by snow boots?

I am not sure how to navigate such things.

Luckily, after two hours of trying to start the lovely, actually heat producing gas fire in our living room, in which pilot light went out and so I was extemporaneously attempting to start it with matches and lighters and listening for gush of gas sound? Which is clearly an indicator of impending doom?
Fire started! Nobody lost an eye, or an eyebrow!
That is my contribution to snow day.
Because the girls want to make snow custard, and I suck at that, because it is a gross thing in general, and today the snow custard was snow plus mango smoothie.
Gross.
But still.
No Jabba the hut melty snowthing, no scorched house or people, and we got to use the snowboots I pay large sums of money for every year and hardly ever get used.

Sure. All snow and no rainy gloomy moor makes Allison a bratty girl.
Posted by Allison at 12:55 PM