I Am Speechless And (Mostly) Wordless! A First, Or, My First Grader's Writings About Music - Am Both Giddy With Glee And Weeping With Joy, by Allison


So now is the end of the school year, children bring home Santa-sized sacks of all of their journals, workbooks, art, and detritus from their desks.

Is a lot, and I always feel like cruel evil monster for weeding out the things that cannot possibly be saved or our house will crumble to the ground due to giant tubs from Target full of kids' schoolwork.

I have a system:
(Granted, non-linear, no defined rules as I abhor restrictions I don't invent myself, is more a visceral, "this is a keeper, this is not.")
of what stays and what goes, and tonight I am sorting out M the seven year old stylists' giant pile of stuff.

Her pile is hysterical, because her yearlong journal is named "Lindsay" and she writes in it as if she is having a little chat with this journal Lindsay.  Her teacher does not edit or help, this is 100 percent M.

And gems like, she has to write in the voice of her big sister E, and imaginary E is giving M advice:

1. Don't wear Uggs in the rain, they will get messed up.

2. Don't play your drums too loud.

Very sage advice from E to M, and I am sure those tidbits of wisdom have been communicated, repeatedly, at varying levels of voice and tone.

It is still totally making me laugh and get teary-eyed.
(I am a SUCKER for these end of year journals.
Am Toast.
Will cry.)

But then, the bestest thing in the world ever ever:

More than when a rainstorm drives away dreaded sun,
Owls stop existing,
Every band I want to see ever comes to my house to play a show,
All the lip balm in the world is at my disposal -

Those things are fab.

But this journal entry is better than all of that.

And I do not say that lightly, as I covet and adore rain, hate owls, love music, and have a lip balm addiction issue.

Totally junior varsity,  compared to this treasure I stumble upon in the pile she brings home, at end of first grade.

Entitled "Me." With lovely colorful music notes scattered around as illustration along with her ME! as emphasis in case anyone was confused.

A Wonderland of all my favorite stuff.

Or a waterfall of memories.

Also a field of the prettiest flowers.

Possibly a forest of friends.

A rocket that goes all the way around the world and back again.

Like a rock and roll song that never stops." 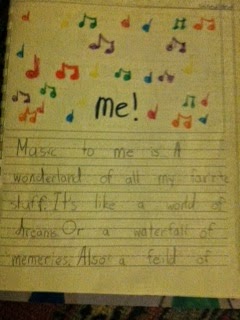 Ok, reading that, written by my seven year old M, not only am I a weepy mess, but I am so damn proud -

I feel what she feels, and could not have written it better, painted a picture of what music means, I am gobsmacked by the awesome.

I mean, I know she has the music bug - she loves the concert T's I bring her, wears Black Keys shirt during a presentation to the class so she can be "loud and cool," and has a drum kit by her bed. 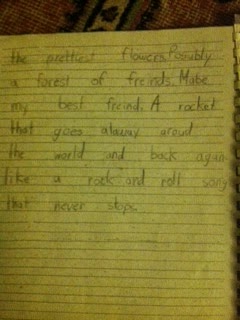 Life around here with the girls and the good and the bad dog and the constant rehearsals or swim meets or who has to be where when - we are whirling dervishes.

That she can absorb and communicate her feelings about music so absolutely gorgeously, at age seven, I am both astounded and giddy.

She had no idea I'd see this journal entry, or that anyone would -
She wrote it because it was in her head.

And I get to have her as my girl.

And totally, completely psyched for years of music and concerts and drum solos from my beloved M.

How can I be a gazelle and then a hyena that fast?, or Why I Love Dance Recitals: by Allison

And to my delight, makeup artist is totally Harijuku girl backup Gwen Stefani dancer person with Crayola red pigtails, knee socks, track shorts.
Fabulous.
And all sorts of kids to adult people are running around in unitards and crazy wigs and it is super fun.
Like, I wanted a costume for me and for the crazy lady to do my face all up.
I still want that. Probably always will.
But the memory that is sticking in my head is this:
After a rehearsal when I arrive to gather the girls, I witnessed a memorable, heartbreakingly hilarious scene:
Outside of the theater, a teenage girl in wacked out animal makeup was weeping on her cell phone, “But I am fine with being a gazelle!
but how do they expect me to change into a hyena that fast???”
So I have to turn the corner and get a hold of myself,
because that is both an absurd conversation to overhear,
and also the existential dilemma of all teenage girls, minus the safari animal outfits.
So I leave the weeping girl and  enter the theater amongst elephants, flamingos, water buffalo (Note: Not kidding, E is one in her jazz part of the recital), cheetahs, hyenas, and monkeys.
In fact, must track down lost monkey ear, which is not something I ever thought I would have to do in life.
"Help! I've lost a monkey ear!" - not making that up.
But I am equipped with my handy Tide to Go and Neutrogena Makeup Wipes (Note: when will they please pay me?)
to remove Insanity Makeup Plus Animal Faces. and hustle children off to regular world, which is equally as bizarre, just in different ways.
But not much can top the excitement and panic attacks and alarming makeup and hairspray and pins and overall "we're doing a show!" vibe of backstage.
And as we seal up the Insane Makeup and put away the costumes
(Fine, maybe I still have V's gold tutu out, I'm not telling either way),
immediately leaping from dance hairspray scent to swim team chlorine scent - I am taking a moment to revel in the hectic, swirling whee and yay and camaraderie of a Show.
Swim team is similar in the team spirit and all, but I can't volunteer for makeup patrol at swim meets. They would think I was insane.
Oooh, but I can start plotting my flash mob - maybe costume this year.
Posted by Allison at 6:57 PM