How To Make Lemonade Out of Lemons, or Actually How To Non-Creepily Have Fun With Severed Dolls Heads, by Allison

Here is what I got today when I asked the girls to find my Kindle while I took a shower. Kindle is found, with severed doll head as bonus. (And before I get into the doll head thing, I am ridiculously attached to my Kindle as is Magic Kindle that magically produces books immediately, and I get twitchy if I am too far away from it. So while I was not in immediate need of Kindle while taking a shower, (Which? Please make one that can go in shower or bath!! That would be fantastic, inventor people, get on that) I like to know where my Kindle is at all times. Children are thusly tasked with finding my Kindle, and since they are not only Kindle detectives but also hilarious, I get severed dolls head also. 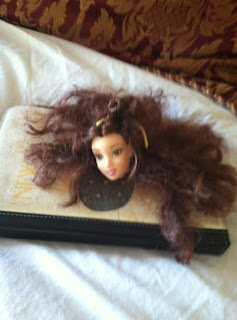 So this is the time where you might be thinking, hmmm, did swim team and FORMS  really actually melt Allison's brain?  And that may be true (note: probably is true),but I promise,  the severed doll head thing is not a situation that could be used on one of those procedural shows about investigating something really awful, the severed head thing is a running family joke.  Does that make it better? Because it is an awesome long-standing family joke and I don't want to get rid of it just because it makes us all look deranged.


As usual, I have backstory: Original Severed Doll Head situation was when we were all in car, coming back from Matt's brother's wife's holiday gathering, which was really lovely and super fun. And they kindly had gifts for the girls, and on the ride home, the girls started removing the gifts, which were those dolls with the big head and the little bodies, from their NASA super polymer packaging. And during this surgical procedure, the head came off of V's doll.

And she knows once the head is off, there's no going back, the doll Will Never Be The Same, (Note: more on that later) she very quietly, as she is sitting behind me in the car, dangles the severed head in my face. And I scream bloody murder, because I totally was not expecting that. And Pulling One Over On Mommy is always fun game, so the rest of the ride home, the head would materialize around me, and at this point I know it is coming but I do screech a little each time, because I love to hear the girls laugh.

So of course severed doll head materializes at random places and random times forever more, although the original SDH is hidden in My Secretest Hiding Place because I am totally mailing it to V when she is in college, in lieu of a care package (Note: I will also send real care package, but SDH needs to arrive alone, that is how it works), any new SDHs that become available in our house wind up used to mess with someone, usually me. And it cracks me up each time, thinking of whichever kid it was plotting a SDH attack.


And while I say new SDHs, this means that they are not allowed to pull off the head of a doll for use of severed doll head joke. That would be: 1.Rude to doll 2. Waste of good toy and 3. No matter what you ever say ever, once you pull the head off of a doll, She Is Never Right Again. Same as getting kicked in head by mule. (Question: Is that a thing, the mule kick expression? Am too lazy to google, but I am pretty sure I have heard it somewhere, and if not, I invented it and want to trademark it)


Once the head is off, it cannot go back on properly. Older brothers of girls all over the universe know this.  No matter how hard you try to appropriately squish the head back on the doll body, it will Not Be Right and doll will have large head and short neck and you will have to only use her as Villain when making your Barbie plays and pageants.  Because you totally need a Villain, I learned this when a doll head came off NOT on purpose and no matter who tried to fix it, She Was Not Right.  And my sister and I were inspired to make her the Villain in our various Barbie scenarios, many of which involved pageants.  And we made the Villains always be really mean to the good, nice, Not Not Right ones, so having a head pop off now and then was actually helpful.

Also helpful if the original doll is randomly insane looking, like this Cowgirl Barbie I had that was bright pink bodied, and one of her eyes was supposed to wink at you but got frozen so she looked completely ridiculous and became a Villain. Sometimes the Donnie Osmond (Note: I have NO idea why we had a Donnie doll. We did not watch that show regularly, he is not my type and also did not have a type back then anyway, and somebody who did not know us must have given us this purple jumpsuited Donnie doll) doll was also Villain because he was crazy creepy, but sometimes we had to use him as announcer or host of Barbie pageant.

So great when accidental Villain creation (due to severed head or weird doll sent to you that is not suitable for any other use) happens, since the play or pageant is way more fun with Villains. The whole world knows this, even guys who are reading this (are there any? If so, thanks and I promise not to solely write about doll's heads, although if you were older brother you probably were doll Villain creator to your sister's Barbies) and are into comics or superheroes or any other thing knows, need Villain.

And now I have really really gotten off my point, (and I do have a point, even if I digress into many tangents and sidenotes, if you hang with me, I will get there) which was, sometimes a severed doll's head is handy, and does not automatically make you creepy. Certainly, in the Venn Diagram of Creepy and of Severed Dolls Heads, there is a lot of overlapping, but there is a segment in the doll head part and that is where we live: Severed Dolls Heads Are Good Villains And Inside Family Joke Makers Land, is where we live.  You are welcome to come visit us there, anytime. We can stage a show, and we have some Villains.
Posted by Allison at 1:22 PM