A Picture Is Worth A Thousand . . Ways I Am An Idiot. Beverage Mismanagement, by Allison

So I am aware my toting around copious teas,
and my wreaking much havoc with my extreme beverage availability requirements -
is absurd and ridiculous.
Proof?
(http://www.iwantanintern.com/2013/04/cry-me-river-of-green-tea-lattes-and.html)

But today, as I was taking a photo of my bike in spin class,
as you do -
in this case,
it was because the picture kind of did that A Picture Is Worth A Thousand Words thing  -

Something I have always protested,
because what if you want the thousand words instead?

But today I am meaning,
one picture is showing many ways I am a tea-toting,
mess-making fool -
(Really, really needing an intern, just saying.)

So I took a picture,
so I could send it to my friends and make them laugh,
as they have dealt with my tea thing long enough to know the many ways I wreck stuff via tea.

And then I realized,
I am way worse than I even realize.

I have THREE separate beverage photos,
of a variety of beverages,
ranging from messy to disgusting to potent but useless -

In the space of one day.

All totally embarrassing,
and if I had any sense I would delete them.

I have no sense.
At all.

So therefore, Behold The Nonsense:

A Day In The Life Of My Beverage Mismanagement, by Allison. 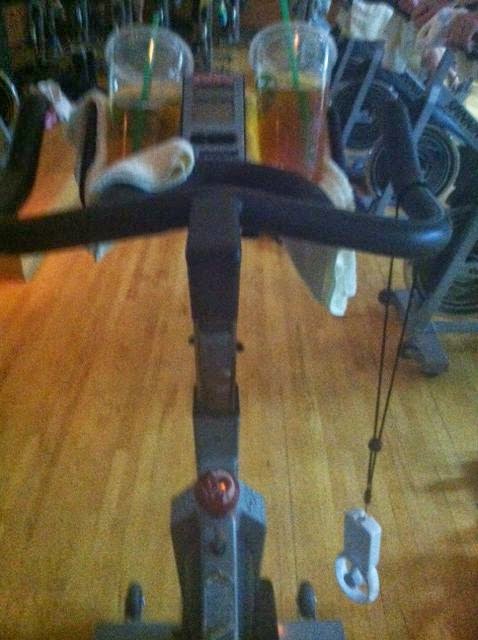 Upon casual glance, you see two giant teas,
towels so the tea does not pitch forward onto the floor,
and random thing hanging to the side.

But this photo is actually an indictment of me,
creating ridiculous situations,
and then suffering the consequences.

1. Those are the Trenta Starbucks green teas,
so like a 7-Eleven Big Gulp, but of antioxidants.

Note, there is no ice in them,
because they are from the previous day.

2. Because I can barely drag myself to the gym on time,
no way can I pull off Starbucks run.
It took me 2 years to realize this.

Because I a an idiot.
But now,
I get tea for the next day,
so I can defeat my inability to get anywhere on time.

3. The thing kind of dangling off the precipice of the bike handles is a personal mini-fan.

4. As you can see,
it is hanging down by where my feet go,
and is not at all providing the delightful breeze-blowing it is meant to provide.

Unlike the fan of my most excellent friend next to me,
her fan is blowing correctly to cool her off,
sitting very properly atop her phone and doing fan stuff.

5. Which is evidence that I have an awesome friend,
who is both so together and non-spilling stuff that she can put her phone on the spin bike.

(Note: I cannot begin to list the falls, spills,
and who knows what would happen to my phone,
if it were perched on a spin bike.
It would not work out well,
that I do know.)

6. And also evidence I have Superpowers, Bestest Friends Ever Subcategory,
because she got me my little fan that I am haplessly dangling in useless and pitiful fashion.

She knows I won't get it together to remember to order one.

7. And she is trying to help me arrange things,
so my fan doesn't dangle like it is a bungee-jumper.

But because I am irrational about my tea access,
I won't listen to her sage advice.

"Allison, I think this all might work better if you had one less drink."

9. Ok, that was hilarious.
It is hard to make me laugh in spin class, but that surely did -

Because she meant, one less drink on my spin bike -

(But Note:
There are TWO drink holders on those spin bikes.

Not phone or anything else holders, identical drink holders.
I did not invent those bikes,
I hardly even want to be on one.
Two drink holders, to me, means this -
You are supposed to acquire and place two drinks on this hell contraption. )

"Allison, I think this might work better if you have one less drink"
is wisdom I have ignored since forever.

I should probably put that on a T shirt so I can remember it,
when I am addled by one extra drink,
wherever I am,
whatever I am doing.

11. But in my defense,
I usually do drink the two teas in spin class, so there.

And after taking this ludicrous photo,
indicting me of beverage and fan-strangling crimes,
I realize the photo I took right before that was ANOTHER ridiculous beverage mismanagement committed by me before I got to the gym.

My attempt at a green smoothie that  morning:

I totally made that in our blender.

It looks like toxic sludge.
It kind of was, actually.

It started out as a smoothie.
But somehow?

1. My normal protein powder and fruit smoothie turns into very unappealing green goop when I decide to go rogue and add green vegetable powder -
containing nutrients and kelp and every green leafy thing that is legal.

2. Further corrupted when I throw in handful of fresh kale and spinach.
I have no idea.
I was feeling the need for antioxidants.

3. And I know from friends and magazines or whatever -
you can hide spinach in a smoothie without it looking and tasting like nuclear waste.

4. I do not know how to make that happen, though.

5. This may be due to the fact that I won't look at, or use,
or consult recipes.

Because?
I hate recipes.
They are very listy,
and I hate lists.

Plus, they are non-negotiable.
There is no question and answer time with recipes.
Do this, use that.
Bossy and inflexible.
I would like to chat or have options.
Being told what to do,
without rebuttal time,
is like, one of my least favorite things.

6. Along with this smoothie.

It was so gross it scared off Matt and the girls -
they wouldn't even fall for the "EWWW. Smell this! It is awful" thing .
I can never believe anyone actually agrees to that but everyone usually does -

7. Except in the case of this ridiculous smoothie,
that I spent twenty minutes throwing bananas,
and coconut water,
and whatever else I could think of to make it not be horrible.

I could not salvage the smoothie.
Tragedy.

So, I am done with beverage nonsense for the day, right?

(Spoiler!!!! Totally not done with the nonsense.)

In a total sad and pathetic absurdity,
here is the next photo on my phone,
taken after the monstrous green sludge,
and the copious teas and dangling fan that took one look at my teas and jumped off the bike.

I really wish the lineup of photos for this one day included something other than me being a total beverage mismanaging idiot.

But, alas -
I am a total beverage mismanaging idiot.
And as gift to the world, everyone can now feel normal,
functional,
and less of an idiot,
when compared to the ridiculousness I manage to create in less than a day.

Oops I Froze The Wine: 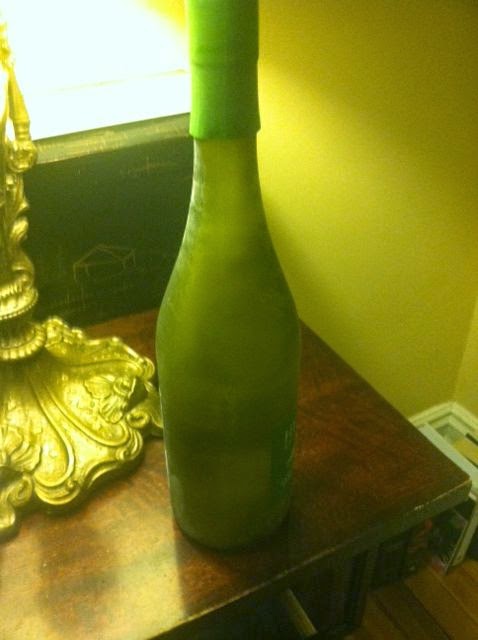 This is the bottle of wine I put in our freezer
because I forgot we didn't have any chilled wine,
and it had been a long day (See above) -

And then I forgot I put it in the freezer,
and it totally froze,
cork came out like a little bad hat.

1. Totally not Disney version of Frozen -
although I hear they are making a sequel,
and I am happy to help.

2. But in my defense
(I always have one, it seems) -
I got distracted.

3. By a LIVE ANIMAL of some variety,
stuck in our dryer vent.

4. It was not an owl,
I know that because it did not chew out of the vent and eat my eyeballs.
My family joking about owls when the dryer vent was shaking,
and chirping,
or otherwise mysterious animal sounds,
plus scratching or clawing or flapping -
what was it?

Does it really matter?

The vent tube thing was rattling all around,
and something was in there.

5. And I am the mean person in this house.

Meaning Matt borrowed our neighbors long ladder,
because our laundry room is on the top floor,
and opened the little trap door.
or whatever you call the thing the dryer vent hooks to and normally lovely clean laundry scent perfumes our our backyard and nothing bad happens.

When something is trying to break out of the dryer vent like an alien baby.
Or small-scale grown-up alien,
I have no idea.

Matt and the girls run outside,
otherwise known as,
not in the room with the crazy scratching dryer tube thing with a LIVE ANIMAL of unknown species in it.

They all open the trap door thingy,
and coo encouragement to unknown species of LIVE ANIMAL in our dryer vent,
like it will come flying out of the vent and escape through the trapdoor.

They are expecting doves or a unicorn puppy.

I know this, because I am the one who normally wrangles the gross stuff.
Such as last time I unhooked the dryer vent tube whatever,
to figure out why it was not working -

For the record, I did it myself,
like a pioneer.

Matt was at work,
and my urgent "The Dryer Keeps Not Working And I Am Going To Start Kicking It" texts,
emails, and messages were met with:
"I will be home later."

I was like,
"No, you don't understand,
I have already cycled through hissy fits and stomping and yelling,
and it has to be fixed this second."

So he was like,
"Just unhook the whatever and screw this and that,
and get duct tape just in case. "

But I needed the dryer to work.
These people in this house go through laundry waaaay too much for me to use rational judgment and wait for a person learned in these things to help.

And I totally fixed the dryer!

It was really gross though.

The vent tube thing had some blockage,
nothing scratching or LIVE, that I could tell.

But when I turned the tube upside down and shook it repeatedly,
the most rancid,
putrid,
primordial ooze plopped out on my feet.

I screamed and tried to run,
but it was on my feet.

And all that was just lint,
some socks with ice cream cones or smiley faces on them,
and whatever made the primordial ooze component.

Yet when the LIVE ANIMAL was thrashing around,
Matt was like "We should call a critter person."

Matt and the girls are like,
"NOOOO. You will kill whatever is in there."

In every house,
somebody has to squash the bugs.
In our house, that would be me.

Matt and the girls would build terrariums or habitats or something.

So they get on a ladder,
and encourage the LIVE ANIMAL to fly or scamper away.

Not working at all.

So when they all had sudden emergency things to do,
involving not being in this house,
I put the dryer on air fluff only -

I am not evil, really.
I did not want to cook the thing.

Anyway,
air in the vent did whatever,
the LIVE ANIMAL is gone,
I didn't kill it,
and I don't know what it even was,
which is for the best.

LIVE ANIMAL dryer vent extraction totally distracted me,
and I froze my wine.

Wine slushie is not the same as lovely glass of wine.

In conclusion, I am a beverage mismanaging idiot.
In one day,
I mismanaged every beverage I came across.