Best Funnest Music Night That Also Included Allison Getting To Talk To Allison Approved Band A Silent Film, plus sad sad country song that makes me sob every time as bonus, by Allison

So, I have totally declared myself  Decider Of What Is Awesome,
and take this pretend job very seriously.
And as am also benevolent benefactor of the awesome,
it is my solemn duty to share the following Royal Decree:

The band A Silent Film is MOST EXCELLENTLY AWESOME.
I know I have already written about their stuff
(Note: I am sure all have memorized everything I post,
but just in case,
I waxed poetic about A Silent Film and their fabulosity here: http://www.iwantanintern.com/2012/08/quiet-lyrical-song-turning-thrashy.html)

But I have new information!
Otherwise known as whee yay tra la la, Matt and I went to see A Silent Film play a killer show, much  awesomeness last night.
And I can verify and add extra exclamation points,
capital letters THEY ARE SO GOOD.

We were lucky,
the venue was small so it was easier for me to snake my way up to very front,
as I am wont to do.
And so I got to see them playing their cool and thrashy and lovely and excellent music,
and also witness their dynamic, electric,
squee yay whee show. 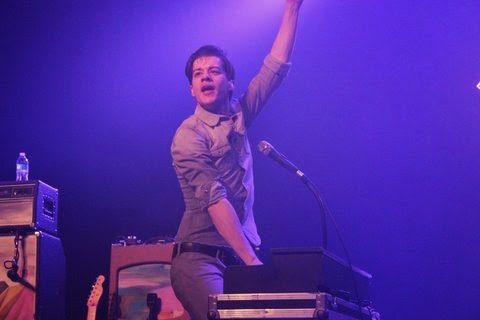 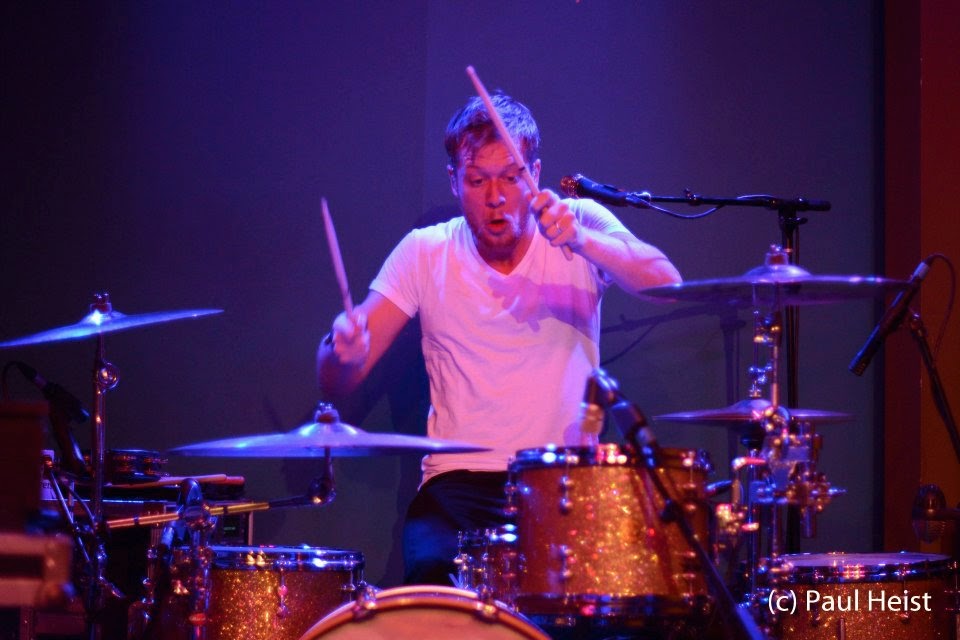 (Note: Managing the very challenging task of both drumming,
and also being cool to watch perform,
does not blur into background of stage like sometimes drummers can do)
being Awesome.

And after the show,
got to chat with lovely drummer, Spencer Walker,
and then, extremely delightful fun scenario,
involving me overhearing in the ladies' room
(My Intense People Watching Pretend Job in full force here)
these two girls, who were toting GINORMOUS cameras,
that were kind of intense-looking cameras,
discussing their strategies for pursuing band members -
for whatall I do not know?
But I don't think it was Scrabble.

But alas, Camara-Ready Groupies!!!!
'Twas not meant to be.
For upon exiting ladies' room, lead singer, named Robert Stevenson,
who did I mention the British and the musician and the hair and the awesomeness?
If not, that was happening,
plus also he was chatting with Matt,
(who had very perfect floppy hair last night, gold star for him)
and I of course joined in, duh, and he is fantastic guy.
Not egocentric lead singer guy,
or chemically altered to the point of wha? lead singer guy.
Is Awesome lead singer guy. 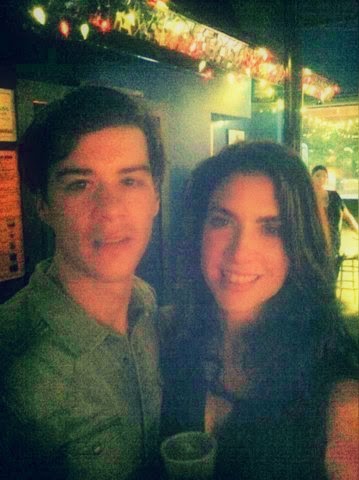 See?  Granted, my phone camera is subpar, but still.
He does not have "get this crazy away from me" face on, because he is cool dude.

And since it is known (by me),
that my Very Important Blog (determined by me),
has established A Silent Film as Totally Allison Approved,
I was compelled to let him know.

And to also let him know that my post on "Danny and Dakota and the Wishing well,"
in which I detail my love for good story-songs,
which theirs is,
as opposed to sad story songs,
mostly of the country music genre,
involving lots of deaths and dyings and super sad things that I cannot process,
led to me getting into chats with people from a blog DEDICATED to sad country songs.

And since I have blog dedicated to whatever it is I like and/or am doing/watching/listening to/avoiding/flash mobbing about?

I am glass house, no stone throwing,
am kettle, no calling pots black.

But it did make me laugh that referencing a song as being awesome because it was NOT a sad country story song,
but in fact the opposite
(Note: People Of The World Hear This:
Go listen to A Silent Film's song.
Actually all their stuff.
Is good for you.
Is Awesome)
led to sad country song fans wanting to debate about the merits of sad country songs.

And let me say this,
listen to whatever floats your boat (but I have really good recommendations if you need any,
since I Have Best Taste In Music Ever, as decided by me)
but I cannot bear the heartache of "He Stopped Loving Her Today" by George Jones.
Is tragic.
Makes me cry every time.
So I discuss this with Robert Stevenson,
lead singer for A Silent Film whose awesome show I just saw,
and am now totally talking to him about my nonsense.


He has not heard of this song,
as he is British and I am not sure George Jones was as big over there as he was in South here.
But he humors me, and I repeat,
A Silent Film is fantastic -
you should listen to their music and go see them live as they are great live!!!!!

But as I promised, (and thanks very much,
had to cry through three versions of the song below to find a good video),
one of the best, saddest, gut-wrenching sad country songs EVER, George Jones' "He Stopped Loving Her Today."