Breaking News, It Is Hot Out!, or Yet Another Reason I Was Terrible Intern, by Allison


So I am headed to the girls' swim meet in a minute, and Breaking News!
It is the hottest day of the year, ever.

This is exactly the weather forecast from last Tuesday, swim meet, hottest day of the year, ever.

I am sensing a trend.

But I am familiar with the stupid It Is Hot Outside Trend.

Behold! A story of maybe last summer?
I don't know.
It was hot.
I try to block it out.

Breaking News, It Is Hot Out!, or Yet Another Reason I Was Terrible Intern, by Allison:

So as I am doing my regular thing, care packages for camping children,
tea acquiring, gym, and such,
many conversations with various people all over the place go something like this:

Every Person:  "It's hot outside."

I am pretty sure the underlying message in all of these conversatons is actually
"It is horrible that it is so hot outside,
it has caused my brain to melt,
so now all I can do is talk about how hot it is, to every person I see."

I may be putting my own spin on it,
because I hate the hot.

HATE.
Super hate if it is hot AND sunny,
that is misery to me.

It means that I will be gross all day,
and lifelong social conditioning and mean commercials make me feel like I am sluglike creature if I do not put on visor and go play tennis,
and I also HATE tennis
(Balls come at you! Fast!
Also I look foolish in tennis clothes)
or put sprinklers on and give the kids popsicles,
while whimsically frolicking outside.
(It may not need to be said,
but I do not do whimsy or frolicking.)

May I order some rain and fog and mist and trees?
And more rain and also maybe a moor?
And include Mr. Darcy and Heathcliff,
and possible sparkly vampires who like forest areas instead?

Trip to Ireland in which all of those above conditions were happening convinced me that is my ideal climate -- I was in heaven and TOTALLY have the wardrobe for it.

(Clarification:
All of the conditions listed above were there except no awesome dudes from books, that would have been extra great and also would mean I would be even more deranged about the sun and the hot) 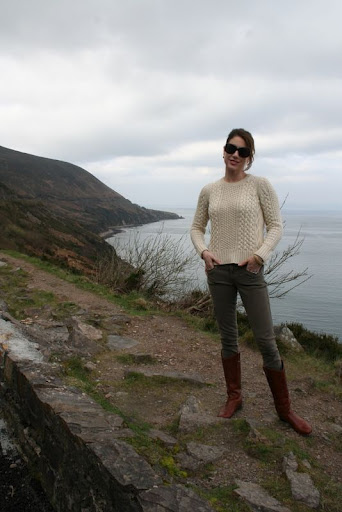 (Proof: Picture of Me in Ireland, very happy with the non-heat and non-sun.)


But I can't say that whole thing whenever anyone says "It's hot outside."

I will drive away even more people than usual,
with my very long opinion on whatever it is that they innocuously bring up,
not realizing who they were dealing with,
and they better pull up a chair.


Also, the "It's hot" conversations remind me of one of the very ridiculous things I did when I was an intern at a local TV station one summer during college.

I've already shared in previous post that I was Terrible Intern,
as evidenced by my wicked glee in mailing a recipe that was gross
(Note: But not poisonous! Am not evil)
that I made up out of random things and called Corn Fancy,
I would mail this to people who wrote in to the syndicated chef we aired asking for recipes and sometimes I would send that recipe out if the recipe-requester was a lunatic
(Note: There were a lot of lunatics, and I don't mean the fun ones, I mean the tape your cat's hair to the letter type),
I detailed that crime in another post a while ago (http://www.iwantanintern.com/2012/06/corn-fancy-or-why-i-am-worst-by-allison.html), this is different awful thing.

As intern, I did a whole bunch of stuff at the station,
which was actually very cool unless it involved something lame I did not want to do,
that part was NOT cool.

Sometimes if there was time to fill on the show that day,
I would get assigned a very ludicrous nonsense story,
and go off with totally sad cameraman to tape it.
(Note: Because I was unpaid intern,
I was not allowed to be on camera,
only my voice and hand holding microphone would be seen,
which now that I think of it, that could have been total lie and they just did not want me on camera,
in which case I am glad they lied,
because that would have been very disheartening to hear)

(Also note: Was excellent for me anyway that I was not on camera,
because now there is no proof of any of the ridiculousness I got myself up to,
unless I willingly write about it)

This station had plenty of actual news to cover,
we were not in small tiny town where not a thing is going on,
and you have to make up nonsense stories.

Here's the part where I go off on a tangent,
but it is relevant and also awesome,
so bear with me.

Speaking of nonsense news stories,
the town in which we have lived for over a decade is also not tiny no-stoplight town,
things go on here,
plus also there is national and international news as well.

But the day we moved here,
the newspaper front cover,
above the fold front page story was:
"Buzz The Cat Survives Arrow Attack."

Which?
Is insane and also awesome,
but slightly troubling because we now live in a town where not only is this front page news -

But it means people shoot arrows at cats here?
Which seems kind of Daniel Boone-ish or Serial Killer In Training.
Neither are appealing to me.

Also Matt saw that headline and was all,
"Um, Allison, told you we should have moved up North."

So I get all,
"You don't know that, there are probably tons of people shooting cats with arrows in Baltimore or wherever further up you tried to drag me.
It is just not in the paper in those places because people are also shooting other people,
with or without arrows,
and that is more important than the cat attacks,
which I am sure are happening there too."

But we already live here so point is moot,
other than the point I was originally making which was:

Buzz Arrow Attack is a very non-news story,
that does not need to be in the newspaper,
except for entertainment purposes,
to horrify newcomers into thinking they have moved into Deliverance 2: Now We Are After The Animals! Town.

I am back to my Terrible Intern story now,
if you can harken back to the time in which you were reading about that,
and not freaking out about what is going on in my town.

So I would get assigned these silly non-stories to fill time,
and it usually meant very bored and sad cameraman and I would go out and do some story,
which was always a variation of:

Please Fill Three Minutes Of Time, We Don't Care What It Is About.

This particular assignment came to mind today when having many conversations with people that boiled down to, "It's hot out."

(Remember when I was talking about that a long time ago before I went off-topic several times?
That was fun.)


So the non-news segment bitter and sad cameraman and I were tasked with was, "It's hot outside."

Seriously, that was the assignment:
It is hot out,
do something on that for three minutes.

So I am already grumpy because it is hot and I have established that makes me automatically total grump,
but also now this is ridiculous assignment and cameraman is all,
"Yeah, you figure it out and tell me where to drive."
(Note: cameraman always had to drive me to nonsense stories,
for some legal or otherwise very smart reason they did not let me drive giant news truck,
I giggle thinking about all the havoc I could have wreaked as Terrible Intern if I had gotten ahold of a news truck)

So my idea for non-news story is not,
children in sprinklers, something something cheerful,
because remember I am grumpy and hate hot.

My idea was,
what is the worst job you could possibly have when it is hot outside?

Because if I have to do a story on "It's hot out,"
it is going to be "It's HOT out, and hot SUCKS,
and here's how it totally sucks."

So I decide?
(Note:  that was the fun part about these non-stories,
and really much of what I got up to as Terrible Intern,
I was left to my own devices,
which is clearly NOT a good call on their part)

The worst job in the HOT is the dudes who are laying tar
(Query? Is that what it is called still?
I think that may be colloquialism,
there may be actual term like "putting down asphalt on a road with big truck rolly thing" or such,
no idea,
I was told at young age the thing they were doing was "laying tar,"
so that is what I call it,
let me know if I am totally off)
in big rolly thing truck wearing hat and full tar-layer man outfit.

Not sure why I decided that was worst job,
except for the fact that it seems like a very un-fun thing to do when it is boiling hot out,
so that was that.

Cameraman is super sad as he drives me around,
while we look for someone doing this bad job in the HOT,
because I do not know if there is anyone actually doing that job right now.

Cameraman is about to kill me,
but finally we find giant rolly thing and tar appliers in big yellow suits.

And then I have to convince them that I am not crazy person
(Note: Am crazy person,
but in this instance in this task,
was not being crazy, or maybe was,
but was allowed to be doing the crazy anyway)
and we really did want to interview them about how much their job sucked because it was hot out.

I am GENIUS Terrible Intern!!

They TOTALLY thought their job sucked because it was hot,
and had lots of different reasons why,
and I got my non-news story!

And I have no idea what the News Director thought,
because I did not want to know.

It did get aired, though.

And one of the tar-layers asked me for my autograph,
which was hysterical,
and the cameraman laughed so hard camera shook, but still.

So Lessons For Today:

1. Do not hire me as intern, I am Terrible Intern.

2. Do not engage me in "It's hot" conversation because I will either be super grumpy because it is hot,
or force you to listen to the above story,
thus causing all the groceries in your car to spoil and you to question my sanity.

3. Do not get tar-applier job in the summer.

4. Do not shoot cats with arrows,
or anything with arrows, unless you are learning archery for next Hunger Games movie or in Olympics,
and if you are doing that,
shoot at the target thing with the bulls-eye,
not cats.

Buzz has been through enough already.

5. And I have to pack up for swim now, so it goes without saying, I could really, really use an intern.