I Know That's You, I Can See Your Concert T, I Bought It For You, Remember? Another Justification For My Music Thing, by Allison

So I am forcing myself to stop searching through my girls' camp's posted photos from their Extreme!! camping.
(Note: I am not exaggerating.
There was army crawling through scary caves in the dark, dangling off of cliffs, something something with tarps and rain, living in the woods with snakes and bears and MUD.)

I am stopping because the photos are not organized in any way that I can discern.
So I cannot easily observe the ridiculously insane things my older two girls did at Extreme!! camping.
(Note: They loved Extreme!!!, and I want to see photos!
Because they are back home in one piece, so them dangling off a cliff won't freak me out as much.)

And I cannot sort out the various places the various photos live in cyberspace,
and I am quite vexed.
It should not be this hard a task for me.

I mean, I realize I am fairly addled when it comes to organization, and repel most technology,
but I am totally not addled in the following skill:

Spotting photos of my children and the concert T they are wearing when they are in death-defying Extreme!! activities.

I can SO do that.

Because I know what they look like, even if it is just their elbow, in the dark, or coated in mud.

AND
I know what shirt they have on.

Because I gave them those shirts.

And remember the show,
and the shirt acquiring,
and the music,
and in general how much I love bringing them Ts from shows -  since I can't do crafts or sew or cut sandwiches into nice triangle shapes like other moms, at least I supply excellent concert Ts.

But I am trying not throw a fit as I search in vain for photos of the girls doing their Extreme!!!  white-water canoeing
(One split in half! Canoe, not one of the girls. Glad I did not know that at the time, or see photos of that.)
I am trying to throw fewer fits.
Turn a new leaf, or such. This photo thing is not helping my new leaf at ALL.

I have located E pre-rappelling and setting up camp for the night with the subpar tarp in her American Authors T,
and hilariously grump facing in a photo where somebody is clearly trying to make her do something she does not want to do in her Bad Books T.

I can't find her caving in "The Black Keys Are My Brothers" T, but I know she was wearing it because she told me so, to mess with me.

Trying to scare me about Extreme!!! damage to a beloved T.
T survived the not-for-the-claustrophobic caving,
as it is a righteous concert T.
And also she wore a fleece over it. She's no dummy, that shirt rules.

But I want to see all this Extreme!! stuff she did Extremely!!!.

I will make giant posters of it as proof she dangled off a cliff,
in a cool T her mom (me) brought her from a show,
that she wore as a way to keep me close to her heart.
(Note: That is my story, and she is not right next to me as I type so she can't say otherwise,
she actually wore it because she likes the band and the shirt.
As she should, both are awesome. But I like my story better.)

I can see V army crawling with a headlamp on through cave, but she's covered in mud and all I can see is her face and then mud.

And V is less interested in having lengthy "What did you wear when you were rappelling? cave-crawling?" discussions with me than E is, so don't even know what she was wearing, other than mud.

I did spot V midnight zip-lining on this absurd 987 feet through the mountains zip-line via concert T recognition, though.

Matt was not sure it was V in the midnight zip-line into darkness photo because it was dark.

And because he couldn't see the anklet she made out of twine the corn at Whole Foods was tied in that she fashioned into an anklet.
Which I guess was his identifying clue when photo searching for Extreme!! camping kids of ours.

But I knew it was V, based on overall intrinsic "I know that is her" thing (shape of elbow), and because of the concert T.
I know that elbow AND that shirt.

It is a brown Dave Matthews shirt that she likes to call "vintage" to mess with me.
And since instilling snark is one of my parenting goals, I don't mind the teasing about the age of my concert Ts.
Plus also, 1993 is not vintage yet, says me.

And as I am distracting myself from throwing a fit due to Extreme!! challenges finding Extreme!! photos, as fit prevention, I do something random and of no use to anyone.
But at least I am not throwing a fit.

My distraction was: I re-read this article from Vanity Fair magazine, written in 1985,
by Dominick Dunne about Claus von Bulow during the time in which he was tried for attempting to murder his wife, twice, and the delusions and arrogance and what???????????? of that article are absurd.
Extreme!! even.

(I am clearly not totally distracted, but as far as attempts at distracting me, no one is dangling anything shiny at me, I have to distract my own self.
And truly, article is fab distraction/procrastination/reading which is good for you, so there.)

I always loved Dominick Dunne Vanity Fair diary entries.
He was quite the heavy-handed name-dropper of a writer, but that was the whole point,
and that article is legendarily, unbelievably, absurdly, whack crazy.
With great descriptions:
"It was the type of house where you walk through huge rooms to get to other huge rooms"
and
"Vivacious, curvaceous, and flirtatious, she seems a sort of latter-day Gabor, with a determination factor somewhere on the scale between Imelda Marcos and Leona Helmsley"

And every other sentence has yet more implausible but true scandales scattered like crazy confetti:
"His mistress' husband following their divorce married the former wife of Dr. Richard Raskind, who changed his name to Renee Richards when he became a woman."

And since this was written in 1985,
when I was not a subscriber to Vanity Fair, but instead Tiger Beat -

And collecting my first concert T for Duran Duran's Seven and the Ragged Tiger Tour,
I missed this infamous article when it was first written.

And what it has to do with trying to find my girls' Extreme!! photos via concert Ts is beyond me, other than I am not throwing a fit right now.
Hurray!

And as I am as always, benevolent benefactor, here is a link to the aforementioned article:
http://www.vanityfair.com/magazine/archive/1985/08/vonbulow198508 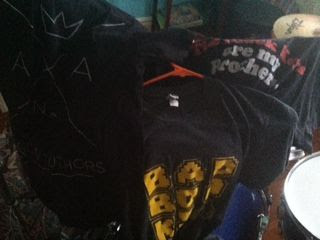 I could totally, seriously use an intern right about now for photo hunting and distraction assistance. Just saying.